To all my fellow Canadians out there.…

I'm not the only one celebrating a milestone birthday this year. While I turned a mere 50, Canada has just turned 150!

In the past I have shared some of the myths about Canada and today I'm going to share a couple of weather facts. While many people seem to believe that it snows all year round in Canada, we do in fact have some rather warm weather in the summer as well though I do have to admit, it can get kind of cold in our winters as well.

Point in fact:
The coldest temperature on record took place on February 3, 1947 in the small Yukon hamlet of Snag, where the temperatures dipped to a rather frigid -62.8° C. Now for all of you who use the Imperial System that equates to -81.04° F. Apparently, there was a joke among the meteorologists that they were unable to toast the new record because the alcohol found at the bottom of their thermometers had frozen. Additionally, it was stated that the air was so still that exhaled breaths could be heard making a hissing noise that lasted for several minutes--not just seconds. You also wouldn't want to find yourself outside with any skin exposed either because in those temperatures it froze in less than three minutes. The coldest I've seen in my time in Northern Ontario was -54° C but that was with the wind chill. This leads us to the highest wind chill temperature recorded which occurred on January 28, 1989, in Pelly Bay, N.W.T, where while the temperature was a mere -51° C it felt more like -91° C (-131.8° F). I definitely wouldn't be dipping my toes outside the door in that weather!

On the other spectrum of the scale, our warmest temperature on record occurred July 5, 1937 where the temp soared to 45° C (113° F). I know this is probably a typical day in the Southern States in the summer but for us, it is kinda warm. When it comes to the humidex, while Windsor, Ontario happens to have the honour of being Canada’s most humid city holding the record for the highest humidex values over the course of a number of years, in 2007 in Carman, Manitoba, it reached a rather uncomfortable 53° C (127.4° F). I wouldn't have survived in that kind of weather as anything above the mid 40s and I can't take in any oxygen due to my asthma. Thank goodness for air conditioning!

Love it or hate it, our weather is a fact of life and it is interesting to reflect on the records made during this past 150 years. 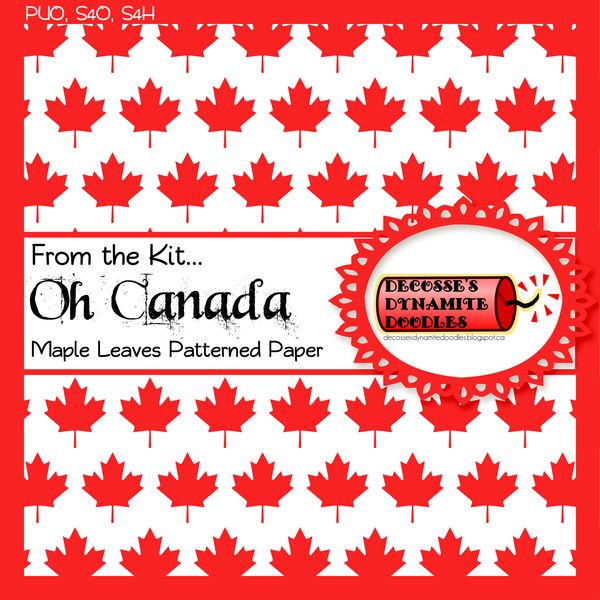 Another interesting fact that I found out during these last two weeks is that the actual Canadian Flag is a registered copyright symbol of the Canadian government and cannot be used either commercially or even non-commercially without prior written approval of the government. I had no idea and it was a good thing I found out as I had originally intended on using the flag for this paper. I'm hoping to write the government and receive permission so that I am able to use it in future years. I also found out the nine pointed maple leaf, along with some other symbols, are also copyrighted. However, the leaf may be used commercially as long as one doesn't try to claim it as their own. Apparently the Canadian government has already done that!

This digital paper is one that will become part of the Oh Canada kit that I am working on. It is 3600 x 3600 pixels, in jpg format and published at 300 dpi. I've used resources from Clker-Free-Vector-Images (Pixabay) and HG Designs. Full credits in the file. To grab it, click the download button to be taken to a download location. In the zip folder you will find a copy of the paper, its preview sheet, the full credit information and my terms of use which are standard to all my folders.

Oh and don't worry, I wouldn't forget the celebration coming up on Tuesday in honour of my southern neighbours; so, be sure to come back then for an Independence Day freebie.

Wherever you may happen to reside, enjoy the remainder of your weekend everyone!

Thank you Lisa for the Canada paper!

Wow what wonderful facts, great post and thank you for the freebie xx

Thanks for the paper Lisa - and the temperature facts too. Wow those temperatures sound extreme. We usually sit between 0 and 12 celsius in winter and about 15 and 30 in summer. Of course there is the odd day in winter hotter than 12 and some days in summer colder than 15.

Go figure on that copyrighted flag huh?! Fun post with interesting tidbits of info, and the paper is sweet! Thanks!

Thank you Lisa for the wonderful maple leaf paper. I know it is for Canada Day buy it is good for Fall too. Edwina Brown