Once again, it is time to submit my cards for the Lady Anne's Progressive Christmas Challenge.  Now this month I'm doing things a bit differently.  Instead of the usual back to back post of both my cards, I'll be posting this first one now and then the next one next Wednesday as I will be combining the second LAPCC image we received with another card I need to do.

Each month Lady Anne hosts a progressive Christmas Challenge where we get two images to play with.  As long as we submit a card with at least one of them, we are eligible to receive two more the next month.  Awesome arrangement.  While there hasn't been any official word, they are holding a DT call for the Chirstmas Challenge with a six month term attached.  That sort of says to me that this challenge is going to continue.  Woo hoo!  That means incentive to get more cards into the Christmas pot.  With this challenge, once I have completed my second card, I'll be up to 12.  YaY!


This month the sponsor is

That turned out interesting as they are also the sponsor over on
The Path of Positivity Challenge blog this month too! 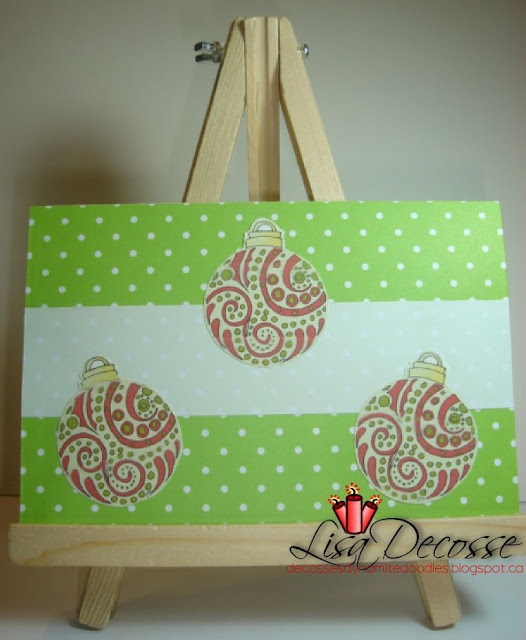 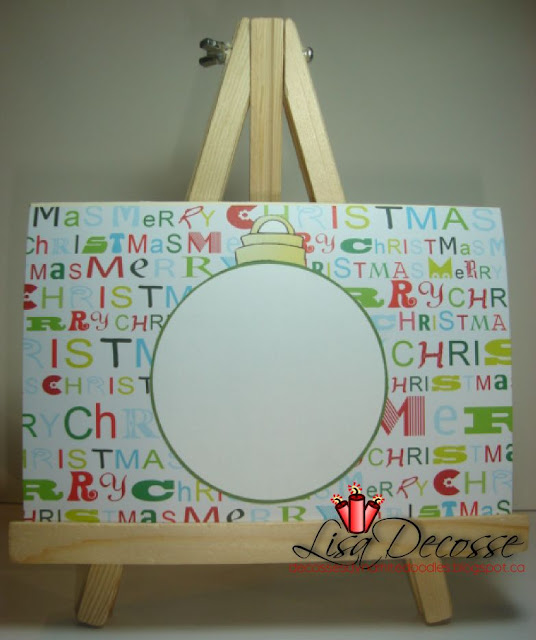 Digital Image:
Paper Products:
Challenges I hope to enter:
I may add to this list throughout the week and or month.

As I mentioned earlier, I'll be back next week to show off the second image I received from Lady Anne.  And can you believe it?  I am actually a whole week ahead in getting this first card done.  Will wonders never cease...now if I could just catch up with all my computer work.  That would be a true miracle, Christmas or otherwise.

There is something visually pleasing about threes - I use that concept a bit. I love how you have done the inner and tied it in with the image. I tend to cheat and use dies but not as creative as your idea. Lovely card Lisa.

That is totally awesome. Love how you have repeated this image 3 times!!! Great card.

Great card - love the baubles and the papers. Have a great weekend.

Very pretty card. I love the layout you used. Thanks for sharing. Edwina Brown

Hello Lisa,
Thank you so much for giving us the directions on how you made the card it was great to read *smile* I do love what you have done with this image also the sensitivity you have shown too. Thank you for being a part of the Christmas Progressive challenge over at Lady Anne...
Love ~ Lady Anne xx

Oooo, Lisa, I love what you did with the ornaments! Great idea to use one inside for the handwritten notes. Love this!

I love this & it is the one that I have done & need to put on the blog & post. I also thought very hard about doing it in 3's. I did 2 of them & then made 2 separate cards. I'm not quite happy with my picture yet. We had a birthday party for my grandson today who will be 1 on Tuesday. So fun. So after a nap I need to get busy! LOL Hugs~Patti

This is a wonderful card Lisa and I'm so glad you're enjoying our challenge. Can't wait to see what you make with the next ones!

I saw your lovely Christmas card on Always playing with paper Merry Monday - you might also like to enter this into my CHNC challenge extra for July - I'd love to see it there too. x

Love these ornaments, Lisa! Great card inside and out! Thanks for sharing it with us at Merry Monday!